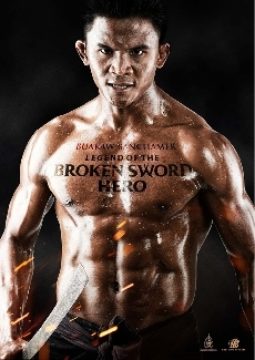 Legend of the Broken Sword Hero

the latest historical action blockbuster from the highly-regarded director,

Bin Bunluerit, tells the journey of “Joi” or “Thong Dee”, (Starred by

in his first leading role), the loyal, relentless, brave, and talented fighter

with unparalleled skills of Muay Thai and swordfight. Joi was given

which turn the teeth black).

The story started at his young age which was a difficult one. Always

bully by the son of the city governor, he ran away from home and grew up

fighting for money. Betrayed by his promoter when he lost a fight, he travelled

to various town to learn the martial arts of Muay Thai and sword fighting.

However, along his journey, he had become friends with “Bunkerd”,

“Muay Lek”, and “Tuek. He picked up the Chinese style martial arts from

a Chinese opera. After that, he learn the “Tha Sao” style of boxing and become

one of the master boxer.

to serve Taksin the Great, the group he saved from the enemy troops were

Lord Taksin’s family, Taksin who unite the Kingdom and became the King

after the war. His honorable acts of sacrificing himself to defend his beloved country

(Lord Pichai of the Shattered Sword).