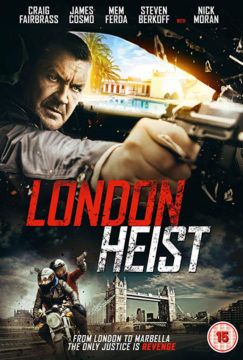 Jack Cregan, career criminal, family man and vicious armed robber, is on a mission for revenge. When Jack’s father Alfie Cregan is brutally murdered and their money from the Heathrow airport heist stolen, Jack, his cousin Sammy, and other gang members Eddie and Frank, realize there is more to the stolen money and Alfie’s murder than meets the eye. Once Jack begins to dig, he knows that his life will never be the same again. The shattering revelations that follow force Jack, with the clock ticking, to not only pull off one dangerous last robbery, but also to exact brutal revenge on all those involved. Set against the backdrop of the gritty streets of London and Marbella’s hedonistic glamour on Spain’s seductive Costa Del Sol. LONDON HEIST is an uber violent stylish revenge thriller along the lines of “POINT BLANK” meets “HEAT”.