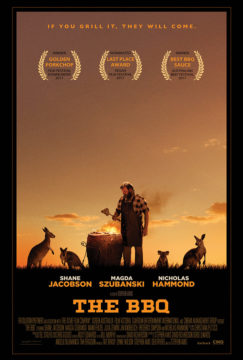 Darren “Dazza” Cook (Jacobson,) is a lovable suburban everyman with a passion for BBQ. Dazza loves to invite his friends and neighbours to his backyard barbecues, though his long-suffering wife Diane (Zemiro) is steadily losing her patience with the way these weekly events are taking over the family’s life. This is only exacerbated when Dazza’s boss nominates him to represent the company at the upcoming international BBQ competition and sends him to learn the finer art of barbecuing from a tyrannical Scottish chef known simply as “The Butcher” (Szubanski.) The Butcher teaches Dazza to “love the char.” Together they use Dazza’s secret weapon an ancient BBQ inherited from the famous Captain James Cook to take on the best BBQ chefs in the world.