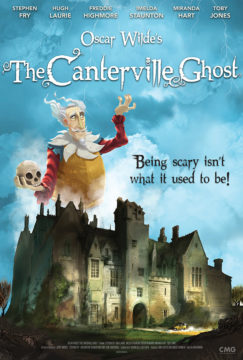 For 300 years, Sir Simon Canterville has been haunting his ancestral home, Canterville Chase, and loving it! But everything changes when an American family buys the estate and moves in. The family is unimpressed with Sir Simon’s ghostly antics and does not find him scary at all… they actually find him to be a bit of a nuisance. It is not long before the family’s young twin boys are scaring him out of his wits, chasing him through the corridors of Canterville, exhausting and weakening his spirit. Sir Simon becomes discouraged and crestfallen from the boys’ pranks, but becomes hopeful when accompanied by the family’s teenage daughter to embark on the journey to find what caused his 300 year-old curse. Sir Simon travels with Virigina through his past and into a magical garden where he comes face-to-face with his nemesis, the Grim Reaper, who challenges him to Sir Simon in a duel to release him from the curse. But if Sir Simon loses, he and Virigina will be trapped in the garden for all eternity. The Canterville Ghost is a warm-hearted adaptation of the literary classic tale, a love-story and a comedy with a spooky edge, a “very animated Oscar Wilde”.