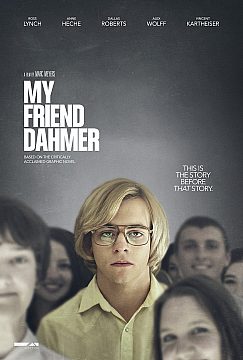 You only think you know this story. In 1991, the world discovered the chilling truth about Jeffrey Dahmer. But before the trial, the headlines and a spate of gruesome murders, Dahmer was a teenage loner. Conducting grisly experiments in a makeshift backyard lab, Jeff was invisible to most, until his increasingly outlandish behaviour unexpectedly attracted friends.

Writer-director Marc Meyers has crafted a haunting and evocative look at one of history’s most notorious serial killers. Shot on location and in Dahmer’s childhood home, the film reveals his troubled family life, his increasingly bizarre attempts to make friends and his fascination with the macabre.

Based on the critically acclaimed graphic novel by Jeff’s classmate Derf Backderf, MY FRIEND DAHMER chronicles the origins of the man, the monster…the high school senior.