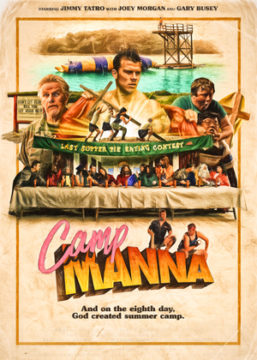 Summer camp is turned upside-down when Ian Fletcher, a wayward "non-believer" 15-year-old boy, arrives at Camp Manna. The camp is centered around the God Games, a Biblically-themed Olympiad focused on turning boys into "men of faith" kind of place. Bunked up with the Passover Privates, a group of outcasts and misfits, and their zealous, un-cool counselor Bradley -- this is the last place on earth Ian wants to spend his summer. Then there are the ‘cool’ kids, Righteous Regiment, led by the savvy and chiseled counselor Clayton. As the competitions approach, Ian realizes that Clayton may not be as cool as he claims to be, and his choice to ditch the Passover Privates and join the Righteous Regiment may end up being the worst decision of his life ever…He and his team Passover Privates must compete and win against the Righteous Regiment to prove their holiness and bad-ass selves. Camp Manna is a "satire with soul", and reminds us that getting to the heart of something is best told with laughter.