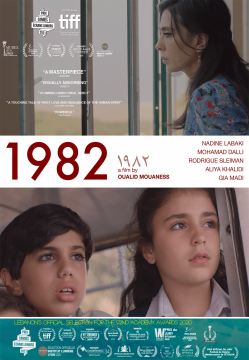 “1982” is based on the real childhood memories of writer-director Oualid Mouaness who perfectly frames an escalating armed conflict with a prepubescent romance between a boy and a girl from the opposite sides of a threatened city. Divided across religious lines at the time, with Muslims on the west and Christians on the east, the entire city eventually came under fire.

The film is set on the last day of classes in an elementary school, integrating customary childhood behavior with the ever-growing apprehensions of teachers and administrators as the rumble of war planes makes it impossible to protect the kids from the worsening situation. As the story develops the escalating erosion of the city is paralleled by the erosion of innocence of its people but one in which childlike imagination finds a way to triumph in the end.

With extraordinary performances (including a spellbinding performance teeming with restrained anxiety by Oscar nominated Nadine Labaki) we are not only given the opportunity to walk back in time but also to walk in other’s shoes in a world where the future of tomorrow is truly unknown. Couldn’t be more timely for all of us!

“1982” is able to treat a heavy story of war and conflict with delicacy and charm to make it spell-bindingly entertaining on every level.