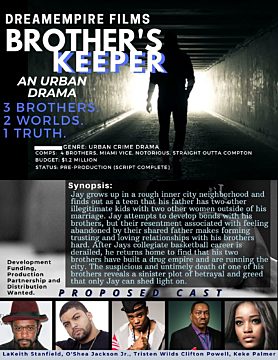 Jay grows up in a rough inner city neighborhood and finds out as a teen that his father has two other illegitimate kids with two other women outside of his marriage. Jay attempts to develop bonds with his brothers, but their resentment associated with feeling abandoned by their shared father makes forming trusting and loving relationships with his brothers impossible. After Jays collegiate basketball career is derailed due to an unexpected injury, he returns home to find that his two brothers have built a drug empire and are running the city. Jay succumbs to a opioid addiction from the pain meds prescribed to him and becomes a full-on addict/alcoholic and is shunned by his brothers and decides to make a change in his life. Drowning in a hopeless state of despair, Jay washes up into the rooms of Alcoholics Anonymous and meets a former alcoholic, who helps him to learn to live life one step at a time, literally and figuratively. But the freedom of Jay's new life is threatened by the suspicious and untimely death of one of his brothers which reveals a sinister plot of betrayal and greed that only Jay can shed light on.

So many African American teen boys find themselves between a rock and a hard place when they graduate with mediocre grades and their hopes of making it big in the music industry or sports doesn't pan out. Many of these boys are lured by the glittery lifestyle of drug dealers and turn to the streets to make fast money. These young men are fooled and ignore the price that is ultimately to be paid for this lifestyle, because in certain neighborhoods, seeing the dope man gives them the only tangible glimpse at a sibilance of wealth.

This story shows how choosing the street life was a life-altering but not life-ending mistake for a young man by demonstrating how he is able to conquer the odds stacked against him and turn his life around and become a man the next generation of boys his neighborhood can look up to.