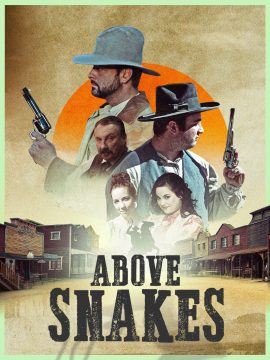 Coleman Dobbs (Brandon Baker) is a man with a tortured past. Returning from prison with vengeance for the sheriff (Rickey Bird) that he feels, “took away everything” from him. Finding that the sheriff that framed him has died and a new sheriff (Lon Hanna) has taken over, he focuses his anger on the one who sentenced him, Judge Clarence Bassett (Jeffrey Smith). Dobbs soon decides that his plans for revenge will involve the judge’s daughter Cathryn (Rebecah Rye), but she has her own secrets. The lives of the judge, his daughter, the sheriff and returning convict become intertwine all the while as men mysteriously go missing from their homes and loved ones. Speculation runs wild but only one man knows the truth, but can he remain “Above Snakes”?