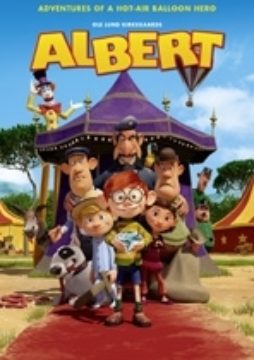 In the little village Kalleby the baby Albert is born. He is the pride and joy of his parents, who love the little and smart boy straight from his birth. Unfortunately the older and narrow-minded residents, who think children are unnecessary, are not amused about this insubordinate and insurgent boy, who turns early in his life the village upside down and with it destroys the statue of the local hero and hot-air balloon pilot Leopoldus. A hero Albert also wants to be and so he starts his own adventure full of spirit of adventure and also a bit of conscience about the destroyed statue.
You don’t want to go alone on big adventure and so albert takes the coeval Egon with him, who doesn’t want to be a hot-air balloon pilot but a pirate!
What starts with a funny boys dream soon takes on other dimensions then first thought and the friendship of the two boys gets put to the proof. Shortly they see each other confronted not only questions of friendship but also of conscience.