Home / Films / Aspirin for the Masses 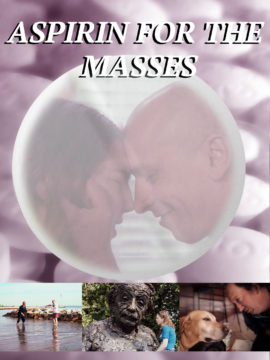 Aspirin for the Masses

Set in Washington DC, this unconventional romcom profiles a series of quirky, borderline unhinged characters as they fall in and out of romantic entanglements. Joni must choose between her Ph.D. common-law husband and her dream lover. Her father Roland is a salesman with a billion-dollar idea, if he can only find angel investors. Michael has a plan to find the cash. Joni's sister Sioux can become a licensed family therapist if she can keep her hallucinations in check long enough to pass the licensing exam. Filling out the cast are a team of lesbian movers, a teenage boy with a secret identity, a suburban mom who did way too many drugs in the 90's, in the 80's, in the 70's, and in the 60's, and Kelly, a first year pharmacy student - and former beauty queen - who steals drugs to pay her tuition. Thrust together in a series of interlocking stories, these characters must all try and make sense of the strange emotional narcotic called love.