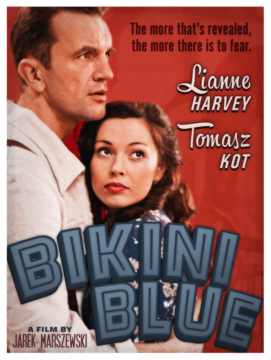 Great Britain, 1953. Stalin is dead but the Cold War is alive and well. The British are celebrating the coronation of Queen Elizabeth II and cinema halls are possessed by "The War of the Worlds". Charming and radiant Dora is an English woman married to Eryk, a former Polish Military officer who is dealing with the trauma of escaping a death sentence in his homeland by fleeing to the England. After a failed suicide attempt he stays in Mabledon Park - a mental hospital for Polish ex-soldiers traumatized by the war.

Dora senses there may be a secret behind Eryk's illness. She also has some proof... Full of anxiety, she starts her old, worn-out motorcycle to visit her husband in the asylum. The long-awaited encounter of the lovers doesn't end in the hospital nor will it be a peaceful and romantic evening on the beach - we are following Dora's trip into the heart of her husband's painful mystery.

With stunning visuals and a suspenseful story line, Bikini Blue is a rare treat for all cinema lovers.
Starring Tomasz Kot, lead in the 2018 Cannes winning film, "Cold War"