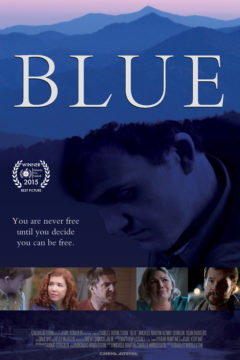 A mysterious young man (Drew Connick) who suffers from the genetic disorder methemoglobinemia which turns his skin blue, leaves his isolated mountain home and enters a small Appalachian town. Distrusted and feared by the townspeople he encounters, Blue’s presence divides the community, while the local sheriff (Sean Bridgers) cautiously tries to disarm the tension.

Blue finds solace and friendship with Pearl (Michele Martin), a young woman trapped in an incestuous relationship with her alcoholic father (Kenny Johnson) while trying to protect her younger sisters and locate her missing brother. Free from bias and judgment, she falls in love with Blue, seeing beyond his skin into the deep and gentle soul underneath. Discouraged from continuing the relationship by a concerned woman (Kelly McGillis) whose own same­sex relationship ended in tragedy years ago, Pearl refuses to push him away.

In order to fit in, Blue undergoes an experimental medical treatment that restores a natural appearance, but at a painful cost. When the medication wears off, he decides to stay blue, beginning to realize that acceptance can only be found within, and the ones who really love you, do so for who you are inside. As Pearl teaches her sisters, “God doesn’t make mistakes.”

Blue wants only to live in harmony with nature, but when he uncovers a clue to Pearl’s brother’s disappearance and possible murder, he is attacked and runs to Pearl’s house to find shelter, but is forced into a violent encounter to save the girl he loves.