Home / Films / Brother of the Year 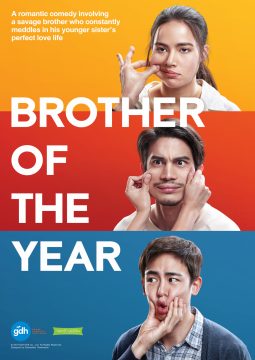 Brother of the Year

Ever since he was a kid, 'Chut' always thought that the baby in his mum’s belly was going to be a brother. Yet, the day she gave birth, he got a sister instead. Chut felt like he had been short-changed. His dreams of playing with robots and playing football with his brother were shattered. Every time he plays with darn 'Jane' she turns into a crybaby. Ever since they were kids until now, Chut and Jane have fought over everything. It’s all because Jane acts more like his mother than his sister and Chut likes to make himself a burden instead of being an older brother. Whether it be in studies, sports, looks or personality; Jane is always more perfect. Jane wonders if there are other big brothers out there that are worse to their younger sister just like Chut. The only time Chut acts like an older brother is when someone shows interest in Jane. Chut will bully her admirers into leaving her alone and considers this as payback.

This is the reason why Jane has to keep her relationship with 'Moji', her perfect half-Japanese boyfriend, a secret from Chut. Jane doesn’t want her relationship to be destroyed at the hands of Chut, like every other one before. However, love isn’t something to be kept a secret, and in the end, Chut finds out about Jane and Moji‘s secret relationship. It is unlikely that Chut will let this pass. A great brother like Chut will do everything in his power to put a stop to anything that makes his little sister happy!