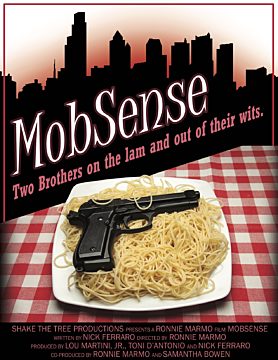 In Chicago, Illinois brothers Sonny “Shakes” and Vinny “IQ” Bonino work for notorious Crime Boss Bruno. Not the most dependable bookies, the brothers have always looked out for each other. They had everything going for them until one too many deals went wrong, putting themselves in quite a few sticky situations.

One sure bet at the track will square them with Bruno but as luck would have it, yet another blunder occurs and Bruno takes a huge loss. After a hit is ordered, their Uncle makes a deal with Bruno. The brothers must leave Chicago for good and they can keep their heads. So, Bruno decides to simply cut them loose but not before one final bungle sets a series of events in motion that even these two can’t run from.

On the lam to Philadelphia, their differences, secrets and lies begin to drive a wedge through their relationship. Throw in an ex-wife and a son and the chaos ensues. But Sonny and Vinny will have to set aside their differences, face their fears and embrace their truths to work together in order to keep their lives.

More missteps in Philly create a domino effect of mishaps that lead them caught right between a Columbian drug deal and the FBI. One final showdown will force them to learn to depend on each other amidst all the MobSense around them.

** In negotiations with name talent and co-producer