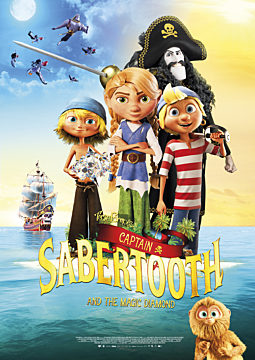 Captain Sabertooth and the Magic Diamond

In a dark jungle somewhere in the Caribbean, the young boy Marco is fleeing from the terrible wizard Maga Kahn and his army of ape soldiers. Marco has stolen a magic diamond that can fulfill wishes at full moon. Soon, the infamous Captain Sabertooth hears about the Magic Diamond and decides to take it... However, he mistakes the keeper of it for one of his former young pirates, Pinky. After a dangerous journey to Maga Kahn’s island, Pinky and Marco realize they have more in common than to save the diamond from both, Captain Sabertooth’s and Maga Kahn’s hands.