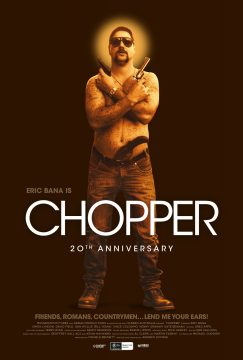 Written and directed by Andrew Dominik, in his feature directorial debut, CHOPPER tells the story of the late Mark Brandon “Chopper” Read, real-life convict, bestselling author and self proclaimed “national icon”. And it’s the film that turned Eric Bana into an international superstar.

His story is savagely funny and twisted. Chopper dreams of making a name for himself as a legendary crime figure. He begins his journey as a wisecracking criminal failure inside a maximum security prison but manages to twist his violent life into a story that fascinates and polarises both press and public.

Newly remastered to mark its 20th anniversary, this is the first time the film has been available to view for many years. CHOPPER is a bona fide cult classic and a one-of-a-kind cinema experience.