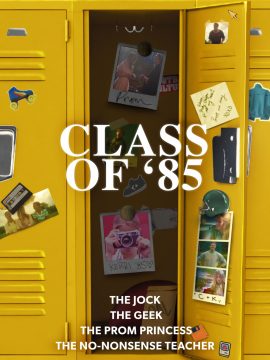 "Class of '85" takes place in the mid 1980's and focuses on an unorthodox high school teacher, Mr. Murphy, and his small class of nine students. Calvin Mayfield, a new student to the class, falls head over heels for a girl named Kerri Kennedy. But because of his shy nature, he struggles with building a friendship and relationship with her. So he seeks out the advice of a local inmate named Lawrence who begins giving him lessons on how to get this girl. In the meantime, Lawrence secretly begins getting private life lessons from Mr. Murphy. Every character in the film has some sort of story, and so this movie really exposes those individual tales. The students begin to grow and discover themselves as Mr. Murphy's outlandish persona rubs off on them and helps them get a better understanding of life.