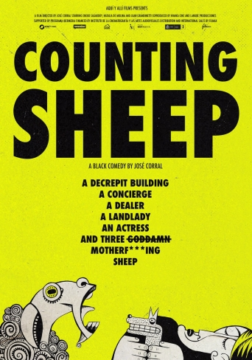 Ernesto is a solitary, naïve man, who is highly undervalued by those around him. He lives in an old, decrepit and practically abandoned building, where he works as a maintenance man. His neighbor, Leandro, a dangerous drug dealer who's made a name for himself thanks to his high-profile customers, terrifies him. Juana, his only other neighbor and also his landlady, treats him like dirt. Ernesto's only friend is his dog Sapo and his only distraction from his boring life is building models.

Ernesto's life leaves a lot to be desired...

Ernesto suffers from insomnia, due to the wild parties Leandro organizes every night with his hip friends and his famous girlfriend Paola. The lack of sleep has had such an impact on his mental state, that his reality has become distorted. So much so, that one night, three model sheep that he built come to life. His new flatmates, Napoleon, Plato and Metis, don't let him have a moment's peace, but they have a mission: to help Ernesto get to sleep. And they're prepared to do anything to ensure that mission is successful.