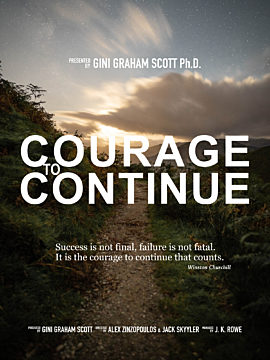 Courage to Continue is a documentary featuring two dozen individuals who have turned their failures into success. It also features some experts talking about how experiencing a failure can contribute to learning and growth. In the interviews, individuals tell their story and offer tips on how others can deal with failures in their life and use them as a stepping stone to later becoming successful. The film also features a few psychologists, counselors, consultants, and coaches who help individuals deal with failure and move from failure to success.

The trailer can be viewed at https://youtu.be/yJ_pHjoximY

Changemakers Productions and Dear Skyyler Productions have now produced 11 films together. The other films include Me, My Dog, and I; Rescue Me; Driver; Deadly Infidelity; New Age of Aging; Reversal; The Last Party; and Death’s Door. The two companies’ offerings include feature films, documentaries, and TV/film series, using online, retail, and theatrical distribution.