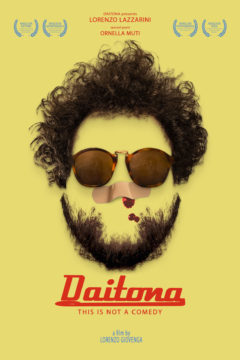 Twenty-four hours in the life of Loris Daitona. He is a former best-selling author, who had published his only novel when he was only sixteen: the teens best-seller Ti Lovvo - I Luvve You. Ten years later, where the hell is Loris Daitona? This hilarious day begins inside an unknown pink bedroom where Daitona wakes up without remembering anything from the previous night. Then, he finds a blood stain on his helmet and a text on his phone reminding him to deliver a certain “Red Sparrow” to the usual place and nothing else. From now on, Daitona is stuck in a surreal chain of events including cases of mistaken identity, serial misunderstandings and ambiguous meetings with erotic she-poets, psycho thugs, fanatic actors and greedy publishers. Set in a look-alike Los Angeles Italian city capital which is inhabited by grotesque characters and endemic caricatures, Daitona must necessary solve a series of apparently unexplainable questions: what the hell happened the night before? What is the Red Sparrow? What do everyone want from him?