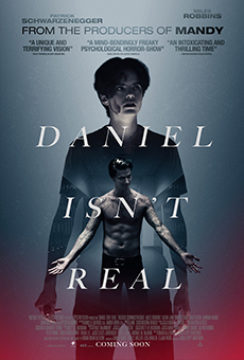 From the producers of MANDY and boasting a critics score of 88% Fresh on Rotten Tomatoes, DANIEL ISN’T REAL is a mind-bending psychological horror which impressively tackles difficult themes with intensity and style. After witnessing traumatic violence as an 8-year-old boy, Luke creates an imaginary friend named Daniel who leads him into a world of fantasy allowing him to escape. After Daniel tricks Luke into doing something terrible, Luke is forced to lock Daniel away and forget his only friend. Twelve years later, Luke (Miles Robbins), is a college freshman dealing with his severely mentally ill mother. After a seemingly innocuous suggestion from his therapist, Luke invites Daniel (Patrick Schwarzenegger), back into his reality to cope. Daniel is charming, smooth talking and manipulative - everything Luke is not. As the pair grow more and more inseparable, it becomes clear that Daniel has a terrifying secret agenda.