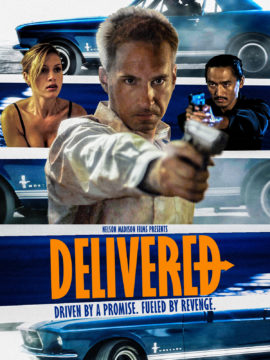 "Driven by a Promise, Fueled by Revenge"

A heartfelt crime thriller, DELIVERED is an intimate tale of loss, betrayal, redemption and bittersweet revenge. In the spirit of films like BULLITT, VANISHING POINT and TRUE ROMANCE, this film is packed with twists and turns, a cool car and a couple on the run.

As a young vet, Shane returns home to a financially broken and widowed Mom and he is determined to get back her home which was lost to foreclosure while he
was off fighting the war. After finding out that she is working two jobs to make ends meet, Shane promises that he will get their old house back. Reluctantly, he takes an armed courier job. Not really wanting to carry a gun, it is the only job he can find. Luckily, Mom saved Dad's classic '67 Mustang which is the perfect vehicle for Shane to use for his job. It also provides an emotional connection to his Dad and is a great source of comfort.

After several routine deliveries, Shane's boss sends him on a special assignment. On the way to pick up a large amount of cash which will ultimately be exchanged for a rare piece of art, Shane stops at a roadside diner for a bite. On the way back to his car, he sees a young woman being molested by a drunk trucker and intervenes, offering the beautiful girl a ride to the next town. Lonely for some female company, he decides to spend the night in a desert motel before leaving the next morning to finish his delivery. Duped by a drug crazed young Japanese man, Shane is forced to shoot the son of a murderous gangster in self defense. On the run and inadvertently entangled in an art theft ring, Shane and the girl seek refuge at the home of a friend. Now he must untangle a web of lies to discover his own truth.

Japanese gangsters, an Armenian art dealer, a retired proctologist and a beautiful young woman compliment a young vet in this well rounded ensemble cast of unique characters. Set in Los Angeles and the dusty desert towns of Mojave Desert, the backdrop of DELIVERED provides a fresh view of California that we rarely see in films.

Well known character actor, Toshi Toda, famous for his elevator scene in CRANK and his work in LETTERS FROM IWA JIMA, plays the head of a Japanese gang into
art and murder. Brian McGuire, playing Shane’s high school buddy, is a frequent collaborator of Alex Holdridge, who’s last film, IN SEARCH OF A MIDNIGHT KISS was a recipient of the John Cassavetes Award last year. Alana Stewart, fresh from her highly praised documentary about the life and death of Farrah Fawcett
plays the Mom with great tenderness. Director Michael Madison plays the lead role as Shane Green, a quiet, understated man that will do whatever it takes to
survive.

Shot on RED, edited on CS5