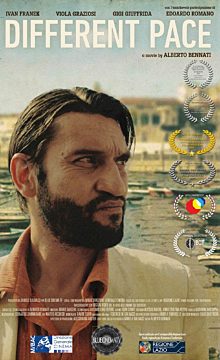 A down-and-out bizarre man without a leg gets to Manfredonia and claims he is the great event manager Remo Campiotti, who wants to organize a magnificent music show right there, in the wonderful city of Manfredonia, with all the Italian music stars of the 60s. With the pretext of making inspections, the faker can thus get into the good graces of an entire city, mesmerized by the dream of music and stars. He lives two weeks at the public expense, admired and courted like a hero. Then he disappears as he arrived, leaving a whole community into turmoil, humiliated and wounded in its pride. In the news, after the scam is discovered, he is depicted as a serial faker: nobody would bet on any of his multiple identities. He did not even steal great amounts of money, so what was his purpose? Fifteen years later in Manfredonia, the local radio is sold to another owner and all the workers are fired. Among them, Mimi, a 40 years old radio journalist, suddenly finds herself without a job and a lot of time to look around. She gets to know for the first time the story of the man who had the ability and the courage to "invent a life" and to cheat even the Manfredonian institutions; it becomes a sort of fixed idea for her. Mimi wants to reveal the epic story of that man through a survey, to be published online on the local news website. Piece by piece, while Mimi asks the citizens of this bizarre and uncomfortable story of the past, it shows a portrait of a community of people not completely lost, with their weaknesses and fears on the one hand, but also with their generosity, their passion and the overwhelming desire to turn the page which a life-loving trickster, with his quick but intense passage, has somehow unleashed. Moved by curiosity, and helped by her radio colleague Vincenzo, Mimì will leave for Albania, to really detect all the traces and to find the real origin of that strange man, who gave a wonderful redemption dream to her city and, probably, to Mimì herself.