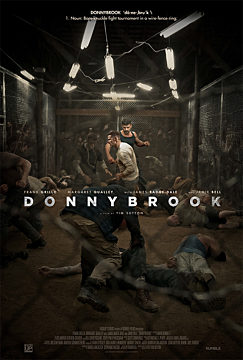 In the shadows of today’s America, a young veteran known as Jarhead Earl robs a gun shop to fund his entry fee into the Donnybrook, a legendary bare-knuckle brawl where the winner gets $100,000 and a new life – or so says the dream they’ve been sold. Jarhead, a man raised to use his fists, sees no way out for his poverty-stricken family unless he wins the fight, and so begins his dark journey through a troubled heartland. Standing in his way is the nihilistic Chainsaw Angus, who along with his sister, Delia, cooks and sells meth to any taker. They leave a trail of dead in their wake, which brings in Sheriff Whalen, a former addict looking to clean up the poison that has bled into his community. All paths lead to the barbaric Donnybrook, where only one man can win, but not without a price.