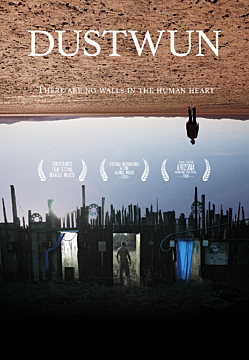 Alternate Titles: A powerful snapshot of what is happening in real time at the American border. Scheduled to premiere at the Arizona Int'l Film Festival, 2020

Set on a remote but active immigrant crossing site just north of the Mexican border, DUSTWUN tells the powerful stories of a desperate Latina woman, Marta, attempting to save her child's life and two conflicted agents who are sworn to uphold an unforgiving policy in the face of their personal struggles. When Marta stumbles into an American veteran soldier, Kenny's makeshift camp, the two form a tenuous bond united by compassion, fear and duty. Repeated visits by the agents to Kenny's compound thwart Marta's attempts to reach her destination while Kenny builds his own personal wall under the orders of an imaginary commander. This engrossing film collapses real-time politics into fantasy and thrilling jeopardy while focusing on the human element at the core of it all....a story of hope for the moment we are living in.