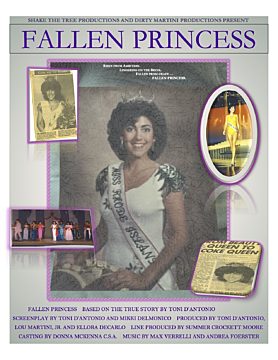 The term snagged from today’s headlines has become very popular in the based on a true story genre. The true series of events that led to the resignation of a state beauty queen in the Miss America Pageant system is the subject.

Set in a tight-knit ethnic community in the Northeast, the story is about Vicky D’Amato and follows the rise and scandalous fall of this pretty, young, talented pillar of the community.

Growing up in a middle-class family with all the advantages that go along with that, Vicki excelled in school. Graduating with straight A’s, Class President, Captain of the Cheerleading Squad and a slew of beauty pageants under her belt...All the things a young role model should revere. Ambitious and tenacious, while Vicki made her parents proud and she was popular, her drive and accomplishments made it difficult to ever quite fit in. But she realized she couldn’t have asked for more opportunities to succeed so she continued her pursuit for excellence and entered yet another beauty pageant. After being crowned Miss Rhode Island, the pressure became intense to prepare for Miss America. Family, friends and the Pageant Committee and staff all thought for certain, she would put RI on the map and have, at the very least, a true shot at the Top Ten and a Talent Award win. When September and Atlantic City came and went, Vicki took home nothing. Not a single trophy or honorable mention from any portion of the competition. This once bright shining star was embarrassed and devastated. The realities of the loss set in and spiraled her into a hole of depression and humiliation.

Longing to fit in with her peers, desperate to escape the ridicule and shame and her desire to not be looked at as simply the “beauty queen” who failed, she gradually descends into a world of drugs and alcohol. No one realizes the destructive route she is on until a shocking 3 am phone call to the D’Amato home; Vicki, having left a night club drunk and alone, has been beaten and raped at the hands of a mad- man. Unable to face the realities of her problems, her descent continues and she further escapes with wild parties, a questionable crowd, a new hard-partying boyfriend and cocaine. One fateful night and an arrest for drug possession finally lead to the quote and actual headline, “FROM BEAUTY QUEEN TO COKE QUEEN” NY Post.

Her small town is rocked...families are torn apart and humiliated. Sensational National Headlines mark this young woman for years to come and Vicki’s struggle to regain the trust of family and friends, and the public respect that once came so easy, is inspiring. Her story cries out to anyone who ever assumed that only dysfunctional kids from big cities and broken families grow up to have drug problems.

A once-promising young beauty queen and aspiring entertainer, struggling with her inner demons, is seduced by the pursuit of fame and the influence of drugs. Which will win? Or will she just be another casualty of a childhood lost and a dream deflated? A “True Story” of redemption.
Risen from Ambition... Lingering on the Brink...Fallen from grace ... Fallen Princess.

(Based on a true story)