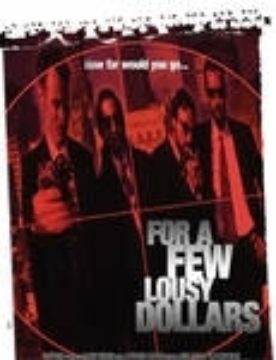 For A Few Lousy Dollars

Talk about doing things the hard way! Danny, Theo & Zack are about to commit the heist of their lives - by holding up a resturaunt that is run by the local mob. They get double crossed by Franky who tips off group about the money that was SUPPOSED to be there. Franky winds up taking the money and skipping town.

Fate literally steps in where the mob boss lets them go, and things get complicated when a hit man from a rival mob (Judd Nelson) gets involved in the picture.

With elements of Pulp Fiction, Lock Stock & Tweo Smoking Barrels, and SNATCH, all the elements collide in an unbelievable shoot out - just for a few lousy dollars.