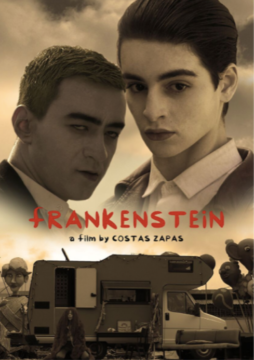 FRANKENSTEIN" is a thriller, a graphic novel with gothic elements, animation and teenage protagonists. It is an enticing, refreshing take on the classic novel that re-introduces its iconic characters for an entirely new generation of viewers and adds an unexpected twist to a haunted fairytale. The story revolves around a theatre troupe that comes to town to perform "Frankenstein". A young female reporter investigating the legend believes that the novel is not fiction but, in fact, the true story of a group of alchemists founded by the young doctor Victor Frankenstein. In 1817 they managed to defeat mortality and return from the dead! Interviewing the theatre troupe members, the reporter is confronted with the dark heroes of the novel who keep on appearing in the city...alive. Her investigations lead her to a universe of monsters and finally to a revelation.

With its perfect command of tone and mood, its hypnotic way of drawing us into its puzzle, with its austere visual beauty, Costas Zapas' Frankenstein is a modern masterpiece. It's an exciting new addition to the groundbreaking GREEK WEIRD WAVE CINEMA whose other auteurs include, Yorgos Lanthimos and Athina Rachel Tsangari.

Costas Zapas has been named by Cineuropa as "one of the most outstanding directors of contemporary auteur cinema" and by the Guardian as "one of the main protagonists of the burgeoning Greek new cinema wave". Zapas was discovered by Lars von Trier who financed and co-produced his feature film, "Minor Freedoms".

The script of "FRANKENSTEIN" has been selected among world's best in Toronto IFF (Toronto Producers Lab), the Network of Asian Fantastic Films, Busan IFF, European Crossroads Co-Production Forum, Thessaloniki IFF, and the SIFF project, Shanghai IFF. The movie has just been completed and will be in competition at the leading festivals of the world.