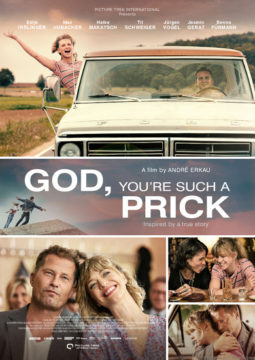 God, You're Such a Prick

Based on a true story. 16-year old Steffi just graduated from high school and is very much looking forward to her class trip to Paris where she has promised her boyfriend Fabian the romantic night that she has kept him waiting for since they started dating. Her lifelong plan to join the police forces is already set up which means her adult life is right around the corner. At a routine health check-up, just before the trip to Paris, Steffi and her parents are faced with a shattering diagnosis: Incurable cancer with a life expectancy of less than a year. While her mother Eva (Heike Makatsch) immediately tries to helplessly protect Steffi from everything, let alone a school trip to Paris and her father Frank (Til Schweiger), a protestant priest, questions everything he ever believed in, but Steffi is determined to shake off her doomed destiny. With the old pick-up her father has just set-up for her and after meeting the charismatic and darksouled motorcycle acrobat Steve, both set out for a road trip to Paris, with Steffi being determined to get her romantic night with Fabian, who has already left for Paris. On their heels are Steffi’s mother Eva, who frantically wants to bring Steffi back to her senses, in company of her silently suffering father Frank. For Steffi it is the beginning of a breath-taking road trip fuelled by the lust for life and to find out what she truly wants with the time she has left…