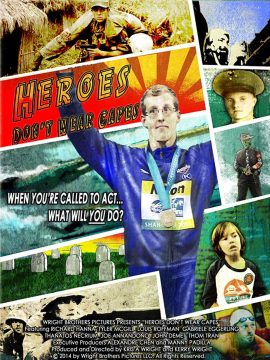 In 2013, comic book sales reached its highest level in a generation... private citizens worldwide donned costumes as part of a growing real-life super hero movement... and super-hero based movies remained Hollywood's biggest box office draw. What is driving the rising superhero craze in our mainstream culture? The Wright Brothers want an answer. Follow them on an odyssey that begins at Comic-con then ends in a search to discover if there are genuine heroes among us. This film dramatizes the pulse-pounding stories of remarkable individuals the Wrights cross paths with in their quest. Individuals like philanthropists, athletes, social activists and soldiers. These are the true stories of people who had the courage to act in extraordinary circumstances. When you're called to act, what will you do.