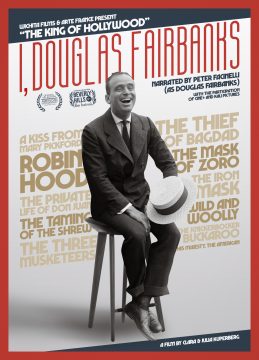 The dashing, dazzling and debonair Douglas Fairbanks was the movie star who “swash buckled in Zorro, dueled exuberantly in Robin Hood and soared magnificently in The Thief of Bagdad”. He was the “First King of Hollywood”. His life story unfolds with American history and the emergence of the film industry as backdrop. His films crossed all borders. His physique and style made him the perfect American icon. At a time when the country did not have any self-doubt, he represented America like no one else: strong, confident, heroic, smiling and conquering. He was “Everybody ́s Hero”. During his marriage to Mary Pickford, “America ́s Sweetheart”, the couple dominated the headlines and turned the scrubland of Beverly Hills, inhabited by coyotes and snakes, into the poshest place in town. Fairbanks also became one of Hollywood ́s founding fathers. In 1919 together with his best friend, Charlie Chaplin, his bride-to-be Mary Pickford, and director D. W. Griffith, he started the United Artists Studio which is still a Hollywood player today. In 1927, Fairbanks was a founding member of the Academy of Motion Picture Arts and Sciences. As the host of its first prize giving ceremony in 1929, he handed out 14 awards to his peers, but he never received an Oscar himself during his lifetime. Also in 1929 he was involved in the establishment of the School of Cinematic Arts at the University of Southern California thereby creating one of the first faculties for film studies. In this documentary the life of Douglas Fairbanks in a first person narration, drawing on film clips and newsreel footage to show that he invented a style that would be emulated for decades. No Superman without a Fairbanks signature pose, no Batman without The Mark of Zorro