Home / Films / In A Land That No Longer Exists 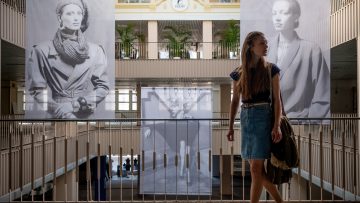 In A Land That No Longer Exists

East Berlin, 1988. Just before her final exams 17 year-old Suzie is expelled from school and is forced to work in a factory. When a chance photo of her ends up on the cover of SIBYLLE, the ‘Vogue’ of the East, it thrusts her into the glamourous fashion world and gives her an opportunity to flee from socialist factory life. Suzie dives into the dazzling underground subculture where the homosexual Rudi and his friends invent and create their very own fantastic and passionate fashion designs. When she falls in love with the talented and rebellious photographer Coyote, her life ultimately changes. On his "Indian" motorbike, they speed towards the beach and Suzie lives the freedom she had always dreamed of. But while Suzie’s star as a supermodel is on the rise, Coyote makes plans to flee to the West, her little sister’s mental health deteriorates and Suzie is asked to betray her friends. Now Suzie must decide: what price is she willing to pay?