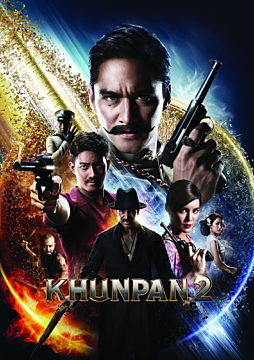 The highest budget action blockbuster of 2018
The end of World War 2 was approaching, Japan was on the brink of defeat, Thailand’s administrative power from the capital reached its lowest. Bandits who wielded the power of sorcery built their own kingdoms. The 4 notorious ones who were feared by all; Sua Fai, Sua Bai, and Sua Mahesuan of Suphan Buri, and Sua Yom who ruled Chai Nat. They roamed, robbed, and killed anybody who stood in their way and nobody knew where were their lairs. Khun Phan was urgently called into service to infiltrate the bandit gangs using the alias “Sua Butr”. He became a close friend of Sua Bai and became a minion of the Great Sua Fai. However, what he had seen in the camp made him doubted his role whether he was still a police at heart or became more like a bandit. He fell in danger as both the police and the bandits started to doubt his loyalty. He must confront those with equal wits, sorcery, and martial arts who sought to kill him. Khun Pan will have to use all his skills both physical and mental to try to survive the onslaught of both the law and the outlaws. Who will be the last one standing in the game of physical forces and cunningness.