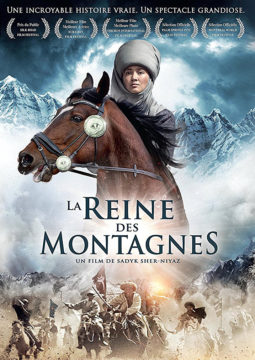 During the early 19th century it is predicted that Kurmanjan, a young girl from Central Asia, will have a great destiny and that she will become the ruler of her country and save the nation from total destruction. This prediction was mocked, as women at that time had no rights.

As a young woman, Kurmanjan is forced into an arranged marriage with a man she does not love. However, on the first night she runs away back home, breaking with tradition and bringing shame on herself and her family. The feud between the two families is resolved by Alymbek Datka (ruler of the Alai highland country) who frees Kurmanjan from the imposed marriage and later takes her as his wife. But several years later he is murdered, leaving Kurmanjan widowed with a young family.

After her husband’s death, the burden of the responsibility for the safety of the people and the independence of her country falls on the shoulders of Kurmanjan. Nearby enemy states attack Alai but Kurmanjan gathers together an army and fights back. Due to her wisdom and strong-willed character, she manages to prevent interstate intrigue between the Kokand Khanate and Bukhara
Emirate and receives the title “Datka” (General), the first time in the history of Asia that this honored title has been received by a woman.

As time progresses, the Russian Empire invades Central Asia and begins its colonial policy but, after long battles and numerous losses, eventually signs a peace agreement with Kurmanjan Datka. However, the new Russian military governor dislikes Kurmanjan and decides to destroy her people. Kurmanjan, realizing the power of the Russian Empire’s army, does not want to come into conflict
with him. However, the governor orders the arrest of one of Kurmanjan’s sons, ostensibly for the murder of Russian soldiers, and sentences him to death by public hanging. Kurmanjan is faced with the dilemma of choosing between the life of her son or the fate of the entire nation.