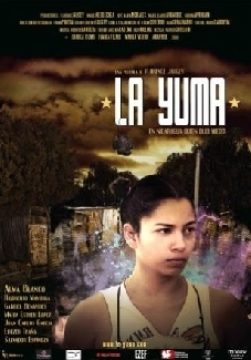 Managua. Nicaragua. Present time.
Yuma wants to be a boxer. She is 18, belongs to a gang called the Culebras and lives with her family in a very poor neighborhood amidst the disaffection generated by grinding economic need. Her great physical energy and strong temperament are her salvation and push her toward her goal. She trains first in her friend Yader’s gym, and later with Polvorita a famous boxing trainer, who takes her under his tutelage. In search of independence, Yuma accepts a job in the store of her mother’s friend Scarlett. Her very first day at work, she witnesses a robbery that puts her in the path of Ernesto, a 22-year-old journalism student from a lower middle-class family who was educated under the Sandinista revolution’s ideals of creating a more just society. Their meeting is troubling for both, but their mutual attraction and curiosity about the different world each represents leads them to fall in love. With Ernesto, Yuma discovers a new environment of students, music, fun and excursions that bring her in contact with nature. With Yuma, Ernesto comes face to face with another reality of the country he so loves and with the violence that is part of her everyday life. For a while, love masks the differences and unites them in the shared desire to find their own space in a society that has little to offer them. Tensions mount in her neighborhood: while the gang is preparing for an assault on a delivery truck, la Cubana, Yuma’s transvestite friend warns her that her former boyfriend Culebra, the gang’s chief, is jealous of Ernesto, who could be in danger. Shrugging off the warning, Yuma pursues her romance and trains passionately with Polvorita. In response, Culebra orders that Ernesto be physically warned off, with the complicity of Yuma’s older brother. The truck assault ends in the death of a police officer while the message to Ernesto degenerates into a brutal beating that forces him and Yuma into opposite poles. They become like pugilists in their respective corners, except that there is no winner, only break-up. Without veering from her objective, Yuma gets into the ring and wins her first fight, to the delight of her friends and of Polvorita. The victory, however, is soon overshadowed by Yuma’s discovery that her mother’s live-in lover is sexually abusing her pre-adolescent sister Marjurie. With the help of Scarlett, Yader and la Cubana, Yuma leaves home, taking Marjurie and her little brother with her. Faced with her new responsibility as both mother and sister, she sees a way out when Yader puts her in contact with the owner of a traveling circus that is looking for a new spectacle: female boxing under the big tent. Yuma accepts his job offer without hesitation. Seated on top of the circus truck with her siblings, she leaves her old neighborhood behind. New horizons appear before her.