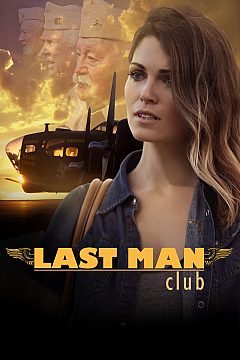 "Last Man Club" is a heartwarming, road trip adventure of four military veterans facing their later years. Stuck in a VA Hospital, Pete (Barry Corbin) asks a kind nurse to track down Eagle (Jim Mackrell), the Captain of his B-17 crew during World War II. Housebound at his son’s (Michael Massee) and facing the purgatory of a nursing home, Eagle gets a letter from Pete and embarks on a cross-country trip to reach him. His plan? Get the rest of their B-17 crew and complete one final mission! As his journey begins, Eagle encounters Romy (Kate French), a beautiful spunky woman on the run from a gangster. With Romy at the wheel, they track down Will (Morgan Sheppard), a war hero living in a broken down trailer -- and then discover their bombardier, Grady (Richard Riehle) at a rest home. With the police, the mob and the FBI now all chasing them, it’s a race to fulfill what might be their last great adventure!