Home / Films / Light For The Youth 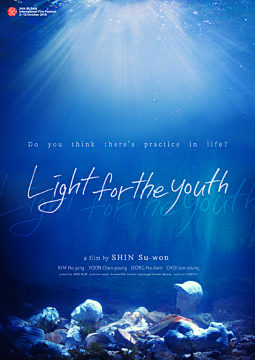 Light For The Youth

Seyeon is a manager at a company called 'Human Network' and lives with her daughter Mirae. Her company manages collecting overdue credit card bills, and
recently corporate has been pressuring her due to her low numbers.
Mirae is trying to go to a larger company while working at a small enterprise as an intern, but keeps failing. Continuous failure makes her depressed. Seyeon is
frustrated with her daughter Mirae, and gives her advice that only pressures her more.
June, a commercial high school student, wants to be a photographer but works at Seyeon's call center as a student intern for the money. The emotional toll from
being pressured to make more calls by his team manager and calling people to pay their bills is too high for young June.
One day June disappears leaving a suicide note and since then a series of mails are delivered to Seyeon.
In the course of finding the cause of June’s disappearance, Seyeon realizes what she has done wrong to him. And she finally understands Mirae’s suffering and
reconciles with her.