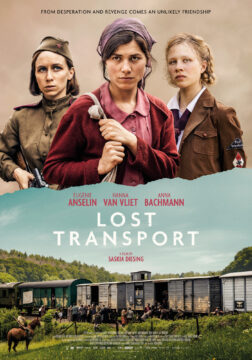 In the final days of the turmoil of World War II with German soldiers abandoning a deportation train to the fate of advancing Russian troops, the chance encounter between the distrustful German girl Winnie, the courageous Dutch Jew Simone and the fearless Russian sniper Vera leads to an unexpected friendship.

23 April, 1945: a train with some 2,500 Jewish former prisoners from the Bergen-Belsen concentration camp comes to a stop in a field near to a German village. The German soldiers flee from the advancing Russian troops, abandoning the people on the train to their fate. Among them Simone, a survivor by nature, and her husband Isaac from Amsterdam. Soon afterwards, a company of the Red Army arrives, including the sniper Vera. The young Russian soldiers force the German villagers to give the exhausted people help, food and shelter. One of the villagers is 17-year-old Winnie, the butcher’s daughter. Winnie is deeply traumatised as she had just witnessed her desperate mother jump out of a window and die when she tried to get away from the drunken, looting Russian soldiers. At this very moment, Vera, Simone and Isaac are assigned to Winnie's house. All Simone wants to do is leave the German village at the first opportunity since it quickly turns into a chaotic refugee camp. But the Russians have imposed a quarantine to contain the typhus epidemic that has broken out on the train. No one is allowed to leave the village. To Simone's frustration, Vera turns out not to be a liberator, but just another prison guard. When Isaac develops symptoms of typhoid fever, Simone tries everything to prevent him from being taken to the overcrowded field hospital. In a house and village marked by mistrust, despair and resentment, the three finally decide to help each other to care for the sick, and their mutual understanding grows. An unexpected friendship develops between these women who could not be any more different from one another.