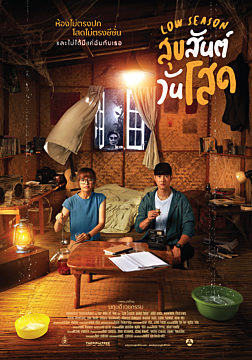 Lin, a young girl with a special sense who can see the ghost. She had problem maintaining a relationship with boys who think that she is crazy. When she tried to keep the fact a secret with her present boyfriend, Ton, who is a TV star and a popular guy with girls surrounding him. He broke up with her anyway for the other girl. She becomes tired of the big city and heads to the faraway resort in the North alone during the so-called "Low Season". She is confident that she won't have to meet the ‘tourists' that will get on her nerves. The place where the view worth millions while you need to pay for only hundreds. Lin arrived at one resort and met Puth, and the ghost of that resort haunted her right away. She could not sleep that night and she kept Puth awake all night too due to her TV staying on loudly all night.
Next morning, she joined Puth on a taxi to another resort. Since she had nowhere to go, she tagged along with Puth and got drunk on the cab. She woke up and meet a group of ‘weirdos' partying there. They came from all walks of life and came to heal their love wounds during the same low season period. Lin's plan of ”lonesome chillin' out” got ruined right away.
Puth, a young screenwriter, came to the resort with a task to write a ghost horror story. Lin became the source of material for his writings right away without her knowing. Both had join forces in the adventures, running together to get away from the ghost and they kinda had a special relationship somehow.
Puth did not mind her special sense and found the usefulness of the ability and developed some story from their relationship. The relationship tended to move well towards a happy ending. However, the instagram status that Lin had posted get her boyfriend to come back to her asking for the reconciliation. Lin decided to take a chance with Ton again. Puth had nothing to say but to withdraw himself. Lin goes back to Bangkok and her normal life with hope for her rekindled love.
But is it love? Lin can see ghosts but can she see Love for what it is?

Low Season is the season for nature to recuperate, will that be the same with the human heart?