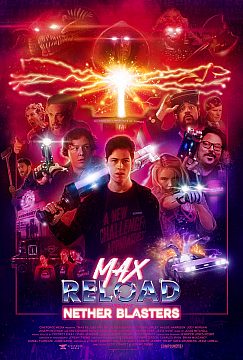 A video game store clerk (Tom Plumley) must go from zero to hero after accidentally unleashing the forces of evil from a cursed Colecovision game. Unbeknownst to Max, the game bears a "Curse of The Ages", and in playing it, he has just unlocked the Nether, an ancient malevolent force of evil from the cartridge, upon his small hometown. Along with a mysterious masked man and his two best friends, Liz and Reggie, Max must figure out how to beat the Nether at it's own game before it's Game Over for humanity. Featuring Greg Grunberg (Lost, Star Wars: The Force Awakens), Martin Kove (Cobra Kai), Lin Shaye (Insidious), Wil Wheaton (Star Trek) and Kevin Smith (Jay and Silent Bob), MAX RELOAD AND THE NETHER BLASTERS is like Goonies and Back to the Future for the new generation!