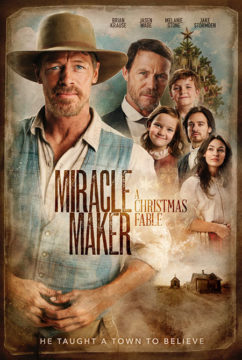 Thomas is a young man that does his best to look after people in an old west town that’s fallen on hard times. Ever since the local mine was stripped clean, the townspeople have struggled to get by. And they all owe money to the town’s biggest landowner, the heartless Mr. Booth.

Thomas is very much in love with Booth’s beautiful daughter Lily, but Mr. Booth has forbidden them to see each other. When Thomas took Lily for a wagon ride, the wagon overturned leaving Lily with a scar on her face, and Booth blames Thomas for the accident.

But when a stranger named Matthew comes to town, carrying nothing but a small sack and a chicken, things begin to change. Matthew trades his hard work for a place to stay; he trades a few old rocks for loaves of bread and little corn. He plants wildflowers. But somehow, some way, through these small actions, joy starts to return to town. Maybe the Miracle Maker can even soften the hardnosed Mr. Booth enough for Thomas and Lily to finally be together.