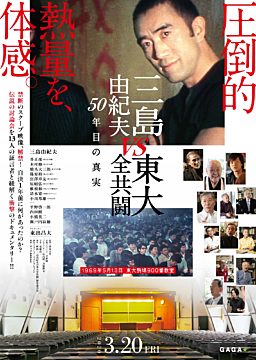 During the time of mass movement rising in late 60’s all over the world, an internationally acclaimed author, poet, playwright, actor, film director and critic Yukio Mishima, took part in a heated discussion with 1,000 members of the student movement at the University of Tokyo in 1969, just a year before Mishima’s ritual suicide. The original master footage of his last debate with students has been found after 50 years from the filming.
Though they have different opinions to each other, Mishima addressed to and influenced the young audience with respect. Through the restored 4K footage and interviews of the people involved in the discussion, the people who knew Mishima at that time, journalists and authors of our times, the film pursues timeless thoughts of Mishima which appeals to the people even today.