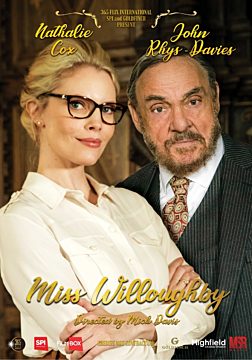 Charming, fun and full of energy, Miss Willoughby is the stuff of old-fashioned Sunday Matinees with mystery and thrills.

Miss Willoughby is an educator and keen adventurer, an heiress to a family fortune who, along with her ex-forces butler, Robert, and cheeky but reliable Jack Russell, Bentley, gets pulled into mystery and adventure.

In this episode, Miss Willoughby is called to action when Professor Schmidt, an authority on the Ottoman empire, and Arif, a Dervish, go missing. The latter was even kidnapped from Willoughby’s mansion outside of York where he was the guest of honour at an event designed to promote Dervish culture.

Team Willoughby - now including Benan, Arif’s niece and Willoughby’s former student - must race against time to discover the reason for the kidnappings and rescue the victims. The kidnappers - Daniel Sandler and his henchman Memmon - are foot soldiers for the Children of Malthez, a group hell-bent on controlling world population by any means necessary.

Team Willoughby discovers that Sandler recently acquired a 16th century scroll containing a riddle that, if solved, will lead to Saladin’s diamond - a priceless jewel lost for centuries and which would fund the Children of Malthez’s nefarious designs for years to come. This discovery also explains the kidnapping of Arif since the scroll was written by a Dervish and thus requires a Dervish to translate it.

Our heroes succeed in tracking down the villains’ lair and whilst they are able to rescue Schmidt the same cannot be said for Arif who, Team Willoughby deduces from a clue left by Sandler and Memmon in their haste, has been taken to Cyprus.

Jetting off to Cyprus, Team Willoughby knows that time is against them. They must find the treasure before Sandler. The location of the diamond, however, eludes them. Team Willoughby are short on inspiration until Benan, who has had trouble accepting the more mystical aspects of the Dervish culture, is drawn to an old building which turns out to be a former Dervish school. Compelled by Miss Willoughby to trust the Dervish meditation techniques which her uncle Arif had taught her, she unlocks memories reawakened by her Cypriot adventure including the location of the treasure.

Benan’s meditation leads to a final confrontation with Sandler and Memmon at the old Dervish School, culminating in a tense and thrilling denouement – a fight high up on a rickety scaffold, and the threat that Arif may be blown to smithereens by a remote bomb. Team Willoughby prevail, successfully keeping the diamond out of the Children of Malthez’s grasp and saving Arif’s life.