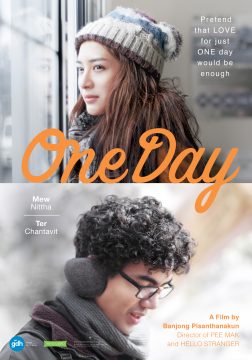 Would being in love for one day...be enough?

‘Denchai’ is a geeky 30-year-old IT officer whose existence is only acknowledged when his colleagues need tech support. He feels even more of an outcast every time his co-workers call on him for help and can’t even remember his name.

Denchai’s mundane world is flipped upside down when he goes to fix a printer for a new girl in the Marketing department named ‘Nui’. Nui happens to get his name correct, making him feel valued once again. From that heartfelt moment, Denchai falls head over heels for Nui, but only admires her secretly from afar, since he wholeheartedly knows that Nui is completely out of his league.

It’s not until one day when their company arranges a company trip to a ski resort in Hokkaido, that Denchai finally takes a leap of faith by making a wish at the resort’s landmark Lucky ‘N Love Bell. Denchai’s wish is for Nui to be his girl for just ONE DAY.

In an ironic twist of fate, Nui goes skiing alone and passes out in the snow. When she wakes up, she is diagnosed with TGA - a rare but temporary memory loss disorder, which lasts for just one day.

Figuring that this is fate’s way of granting him his wish, Denchai decides to lie to his dream girl by telling her that he is her boyfriend and that they had plans to travel around Hokkaido together.

Would you risk everything, no matter how impossible, whatever the outcome, just to be in love for just ONE DAY?