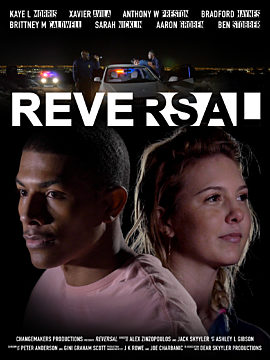 Reversal is a social-drama set in a near future which features a Romeo and Juliet and West Side Story type love story of two high school students set against the backdrop of social upheaval in the U.S. This upheaval has led to Blacks and Hispanics rising in power and wealth, while Whites and Asians have become the new lower class.

Reversal follows the romance of two high-school students: Sammy, a black high school jock from a rich African-American family, and Ella, a white girl from a poor family. After they fall for each other, they soon run into opposition by both their parents and peers. But they overcome prejudice and bullying from the dysfunctional families and environments and bring with them a little bit of change.

The trailer can be viewed at https://youtu.be/S_27cIB8SYM

Changemakers Productions and Dear Skyyler Productions have now produced 11 films together. The other films include Me, My Dog, and I; Rescue Me; Driver; Deadly Infidelity; New Age of Aging; Courage to Continue; The Last Party; and Death’s Door. The two companies’ offerings include feature films, documentaries, and TV/film series, using online, retail, and theatrical distribution.