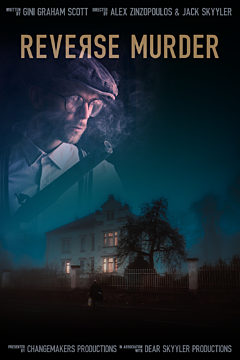 Reverse Murder is a suspense thriller and dark comedy about a rogue mortgage broker and investor having financial difficulties who comes up with scheme, since older people are on drawing on their equity in a reverse mortgage. But the mortgage companies are allowed to drop them when the money runs out, so they are costing the company money and leaving nothing to their kids.

In the scheme, the mortgage/investor decides that it would be good if these older people didn’t live so long and it would help some mortgage companies from going under. So he sets up a covert business that gets rid of older people with reverse mortgages by convincing the kids to get their aging parents to engage in risky activities, so they are likely to die sooner. Then, if that doesn’t work, he’ll get some help to arrange an unexpected accident. He contacts the kids who will lose money from the inheritance and persuades them to go along with the scheme. But one grandmother aces the risky activities and turns into a superstar celebrity on the social media where she describes. Meanwhile, a local cop become suspicious after a lot of old people die in the community under suspicious circumstances and starts to investigate. What will happen?