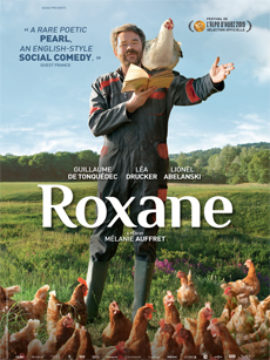 A happily married father of three, Raymond runs an organic egg farm in Brittany, France. He also entertains a secret passion for theater and in particular for the play Cyrano de Bergerac, which he recites to his favorite and only audience: his hens! When his main egg buyer walks out on him, his entire life goes haywire. Desperate to save his farm, he takes on the crazy challenge of turning his love for theater into a series of internet performances starring himself and his best friend/confidante, the amazing pet hen Roxane!
When he posts his first video on YouTube, his friends and family are aghast. But what a stroke of luck when his eccentric neighbor Wendy, a British ex-pat, turns out to be a theater scholar! With her unexpected help Raymond works hard to improve his performances and create a buzz. Can he save his farm, family and marriage by making Roxane and his chicken farm famous?