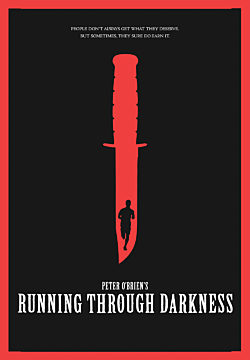 While going for a routine morning run, Calvin Jacobs (Landon Beard) discovers the body of a young woman who has been beaten and left for dead. He recognizes her as Robin, a college crush from his undergraduate years. Unknowingly, Calvin has just taken his first steps into a dark and dangerous world. It is not long before Robin (Lillian Bornstein) returns to Calvin with a bold request -- she wants him to kill the man that victimized her. Reluctantly, Calvin agrees to look into the situation. Karl Screase (Eric Moyer) is a man who is as spontaneous as he is dangerous. His moral compass is shattered and as Robin puts it, "he thrives on control and requires vengeance." Calvin doesn't make it one day before he winds up on Karl's radar, and that's when the game begins. Karl's persistent psychological torment pushes Calvin to a moral breaking point that ends with the ultimatum: kill Robin, or Karl is going to kill him. In effect, Calvin has become the rope in a homicidal tug of war. Amidst all this, Calvin is paid a visit by his father (Corkey Ford - Platoon (1986), Born on the Fourth of July (1989)), who offers him some sage advice that resonates with Calvin through the rest of the story. Calvin resolves to withdraw from Karl and Robin's game of death, a naïve optimism that only pulls him in deeper. His attempts to walk away are met with swift brutality. Ultimately, Calvin finds that the only way back to the light is through the darkness. RUNNING THROUGH DARKNESS stands to show that people don't always get what they deserve, but sometimes they sure do earn it.