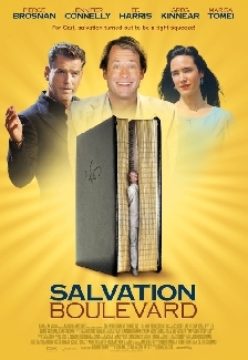 With an all star line up, comes the long anticipated reunion of Pierce Brosnan and Greg Kinnear following their critically acclaimed performance in MATADOR.

When evangelist pastor DAN (Pierce Brosnan) accidentally kills an atheist professor, the incident is witnessed by CARL (Greg Kinnear), a former deadhead who was “saved” by Dan’s church. Dan begs Carl to keep quiet and disguises the death as a suicide, but when the police suspect foul play and investigate, Dan blames Carl.

Now a fugitive, Carl must prove his innocence. in his way are Dan’s followers who’ll stop at nothing to protect their leader.